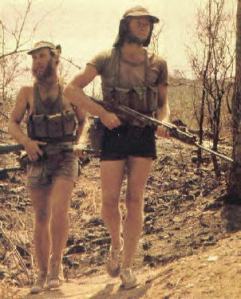 Big news today!  I’ve got a interview up with Auddis Ward.  Auddis served with 173rd in the Vietnam War before traveling to Rhodesia and becoming a Selous Scout.  Here is a portion of the interview:

Tell us a little bit about your experiences in the Vietnam War. What types of operations were you involved in during the war?
My MOS was 11B, Infantry, and I served with the 173rd Airborne Brigade, which I am very proud of. My first two months in country were in a place called the An Do valley. We were on pacification, protecting the rice farmers in that valley from the VC/NVA. The only problem was that this valley was an R&R center for the VC, and most of the valley was controlled by them as well. This is the place where I went on my first of many daytime and nighttime patrols and ambushes. I also was involved in a covert operation in the mountains overlooking the valley. This is where I first had my experience of meeting a real live spook, a black CIA agent who arrived in an unmarked black Huey helicopter and gave us intel on what was going on in the valley. The South Vietnamese local militia that we were working with had been infiltrated with VC, boy that made us feel good!
I was also involved in snatch and grab ops which never came off because of the betrayal of the local militia. A few times we were left by ourselves, the indigs we worked with would cut and run as soon as they heard gunfire, early in the morning in a VC controlled village and we were sent running for our lives.
All this experience would come back to play in Rhodesia and on the streets of Memphis as a Police Officer.
Read more: http://kitup.military.com/2011/12/auddis-ward-american-selous-scout.html#ixzz1gGzwaL2N