Please introduce us to your background, where did you grow up, what were your aspirations as a young man?

I grew up in Singapore, and was fed a steady diet of twigs and leaves, with the odd serving of milk and steroids. This allowed me to reach adult proportions faster than some of my other peers.But seriously, my parents were both graphic designers, and well respected in their field, which I would presume gave me my interest in art and design. As a kid, I was very much inclined like most other kids to be a Police officer ( I liked the look of the uniform) or a Fighter Pilot (Sadly our airspace is very limited)….but alas, they were not to be but I ended up in a career that I love nonetheless as a digital artist.

You served your mandatory  national service in the military of Singapore. Were you able to decide which unit you went to or were you “voluntold”?

Yup, thats right: 2 years plus of national service. Unfortunately, no we are not given the choice to choose which unit we go to after Basic Military Training, although we are given the option of showing an interest in a vocation, such as armor, infantry, airforce, etc. In the end, while I was originally selected to go into an MP unit, I ended up in the Guards formation. Our Guardsmen are basically elite infantry/ Heliborne assault troops, and a tier above regular infantry, and one tier below the local Commandos.

Was there was a selection process for your Recce unit, if so what was it like?

Unlike regular elite units in the US Armed forces where one might apply for a selection into a specific unit, our selection is much simpler, if crude: You simply get posted to the vocation, and if you cant make the cut during training, you are dropped. This is a conscript army after all, and I would assume looking for volunteers for a tough and demanding unit may not have the same number of keen participants like in the US, where most see getting into elite units as a form of personal pride and challenge. So, basically after 2 months plus of Basic, I was posted into the Guards formation. This in itself has another further 8 week training course, with phases and tests including weapons handling, squad based tactics, navigation and rappelling and heli-rappelling. And lots of hassling! I had a platoon sergeant ‘C’,  who was the devil during our course. He was a compact and rather short dude, about 1.6+ meters of height but could the man go. He would routinely drill us for PT and kit turnouts, nothing that was up to his spec was given a severe dose of PT and hassling. He was often seen training by himself at night past lights out jogging around the camp with his fieldpack filled with sand. That said, he was one of our best commanders and highly respected. Last I heard, he was in the Special Operations Force, our local equivalent of Delta. 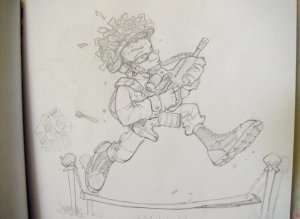 Upon successful completion of the Guards Conversion Course (GCC), my unit was then awarded our coveted khaki colored beret, and sent for BRCC (Brigade Reconnaissance Conversion Course). This was another 8 week or so of heavy lessons in bike riding (off road scramblers), terrain navigation, small unit tactics, and other tests like our 72klick navigation exercise. Once this last bit of training was successfully completed, we were awarded a boonie hat with the ‘Recon’ tab, and finally christened as full fledged ‘Recce Troopers’.

What was your unit’s official designation and what was it’s primary mission?

We were simply ‘HQ 7 Singapore Infantry Brigade – BRC’, and our primary role was for behind enemy lines observation and reconnaissance.

What type of training did your unit conduct?

We conducted lots and lots of PT back then, among other stuff like Engineer Recce training (learning to assess soil and terrain for intel), unarmed combat.

Did you unit engage in any live patrols along the border?

Fortunately never! We never have to conduct any border patrols since the country is at peace and an island and thus surrounded by water. Thats the Navy’s problem!

What weapons and equipment were typically carried on patrol?

We were usually on bikes, to get from one area to another, but once in the AO, we stashed the wheels and continued on foot to the OP. My usual loadout as the designated radio dude would be our indigenous SAR-21 assault rifle, signal/radio set with battery, 2x extra batteries, thermal imaging device (bloody thing weighed a ton and we never ever took it out for use!), NVGs, rations and personal equipment like extra uniforms n kit, helmet (although we always wore soft covers) and other personal items. All in all, the pack would weigh about 40 odd kilos (about 88 pounds). Throw in the webbing, and rifle and you were looking at almost 50 kilos of extra weight per man. Oh, and canned food. While we were not allowed to bring them along, we always snuck a can or two out for any overnight exercises into the jungle. The rations, well, were mostly for shit, with green curry rice being the bane of any soldier unlucky enough to have landed it. Granted though, that a small bottle of tobasco sauce did wonders to make certain items edible. Tobasco, the saviour of foods.

What was the average day like as a Recce?

Average day in camp was pretty simple: Wake up, PT till lunch, break, lessons, PT somemore, dinner. Short break, and then usually some night PT. On outfield/jungle excercises, we would kit up, get a briefing and then ride out to a holding area for further mission briefing. When we were finally let loose, we would ride to within 5-7 klicks of the OP and then hoof it on foot, after camouflaging the bikes. Reach the OP, establish security and comms and we were in business.

What duty position(s) did you hold during your military service?

I was a corporal/radioman in my team of 4 men, and that was basically it! Unofficially, I was the company line photoshop guy, so anything to do with graphics or stuff, I was the one fiddling with the computer. Camp pass photo touchups a specialty. Whats that sir? Remove the pimple from the Colonel’s face? No problem. Occasionally, I would remove the mustache from a certain regimental major or warrant officer…this often led to interesting encounters with the individuals who then saw the result.

Marc showing off his tiger stripes during a training mission

Any tips or tricks of the trade that you can share with us?

I would think I would have much to learn from the other personnel serving in other armed forces across the world who are faced with much more immediate threats and dangers to their country. Ours is very much a peacetime armed forces, and only the regular career soldiers are sent into combat zones.

When did you begin to take up an interest in art? What are your inspirations?

Probably as a child, my earliest memories were of drawing aeroplanes, and tracing those old transformers box art. A sheet of paper and a pencil, and I was happy. Aeroplanes eventually turned into robots and tanks and superheroes, pencils became markers and brushes. Eventually, with the advent of the digital medium I eventually got into this line of work professionally.

It seems that your background as a soldier is closely intertwined with your interests as an artist. How has your military service influenced your art work?

I might actually say it was the other way around: that my interests as an artist is closely intertwined with my background of national service! If you may recall, I was originally aspiring to be a pilot when I was a kid but at some point and I collected and built scale models of planes and helicopters (the F-14 was my favourite!). But one day I thought I would try some soldiers for a change, and i happened upon a kit figures depicting US Special forces during the Somalia ‘Black Hawk Down incident(this was in 1995, 2 years after the event). They really struck a cord in me for some strange reason, and since that time, I have taken a very strong interest in Special Operations units. You will find that I have quite a few pieces of work depicting, or at least related to special ops units. While no longer having to serve full time in the military, I enjoy the occasional game of milsim paintball/woodsball when I can.

Similar to my question about the weapons and equipment you had in the military, what tools to do use as an artist?

Originally, I had started with the traditional pencil, paper, ink, paint etc. And then, with the introduction of computers, Adobe Photoshop and Corel Painter, I started drawing with a mouse, tedious process that it was but it was new to me. That was before I learned of something called a ‘tablet’ which is basically a digital ‘pen and canvas’. Currently, I am using the Wacom Intuous 3 for my illustrations.

Could you describe your process of creation? How does your final art work come into being?

Depending on the requirements of the client and project, generally the process starts with an initial sketch, which is given to the client for preliminary edits and comments. This then moves into a refined sketch or illustration, with constant updates to the client for any edits and changes that maybe required. The constant updates are crucial to prevent any miscommunication and to keep the work accurate to what the client wants. At some point, the work will near its final stages, whereby final touches and edits are made with one last update to the client. Upon approval, the client is then given the final copy of the work, usually a softcopy file. Normal ‘Go to Woah’ time is a week or two, sometimes stretching up to a month.

What have you been up to since leaving the military? Are you a full time artist

After I left the army in 2006, I started work at an illustration studio: Imaginary Friends Studios (you may check them out @ www.imaginaryfs.com) for about a year and a half, before I stopped work to pursue my further studies at RMIT in Melbourne Australia. I graduated with a degree in Animation and Interactive Media in end 2009, and stayed for another year (its a beautiful city!), finally returning home in late 2010. I resumed work at my old studio as a full time digital artist, and am now churning out more works of art, hopefully some of which you may soon see at your local comic store or videogame shop. Anyhow, thank you for reading and I hope you guys enjoyed this simple little insight to my memories of military service.

Thank you for a great interview!  Marc did the cover of “Reflexive Fire” and definitely knocked it out of the park.  I would highly recommend his services to others.  You might want to hit him up for some work now, this guy has some talent and I think it’s only a matter of time before he gets picked up to do graphic novels or comic book covers for DC or some other major publisher.  You can view more of his art at http://rub-a-duckie.deviantart.com/