Is Special Forces Dead in the Water?

When I heard about Linda Robinson’s Council on Foreign Relations sponsored white paper I was expecting another abstract academic work which was frighteningly detached from anything resembling reality but was pleasantly surprised at Robinson’s down to earth recommendations. Her outline of SOF and policy recommendations are impressively on target, especially for someone on the outside looking in, without getting into classified aspects of the Special Operations community.  You can read Robinson’s paper, The Future of US Special Operations Forces on the CFR website.

As someone who was an insider, I felt that I had a bit of an opportunity to expand on a few of her points from a soldier’s perspective. I should note up front that what you will read here are my personal opinions and in no way represent official statements from SOCOM or for that matter the unofficial opinion of the Special Operations community as a whole.

Much have been made over the last ten years about Special Operations Forces, in particular Special Forces, getting fixated on Direct Action operations. While units such as SEALs and Rangers are designed for Direct Action, Special Forces is designed for Unconventional Warfare. Unconventional Warfare emphasizes a long term approach to influencing the battle space by developing host nation military forces (Foreign Internal Defense) and engaging with the local community on various civil projects among other activities. The accusation has been made that SOF has gotten obsessed with conducting Direct Action High Value Target raids at the expense of keeping an eye on the long game.

Read the rest on SOFREP!

Video from the Libyan Civil War

All videos © Matthew Van Dyke.  Check out more at Matthew’s website to learn about the new documentary that he is currently filming inside Syria.  On his biography page you can also read about how Matthew decided to travel to Libya to help some of his freinds fighting the war against Gaddafi’s forces, including his capture and incarceration by the Libyan military.  You can also learn much more about his experiences as a freedom fighter by reading the interview I conducted with him right here on SOFREP a number of months ago.  Check out Part 1, Part 2, and Part 3.

Check out the rest on SOFREP!

Filed under News, Weapons and Tactics

I kit bashed this bad boy together myself after failing to find anything on the market that met the requirements I was looking for.  It is essentially an updated and upgraded form of the old-school Load Carrying Equipment or LCE.  Taking my personal experience into account from Iraq and Afghanistan and combining them with the military theory of people like H.J. Poole and William Lind, I then incorporated what I’ve learned from studying military history, particularly, the Vietnam War and the Rhodesian Bush War.

Today, soldiers are weighed down with far to much equipment.  This is an issue I’ve addressed in this blog before, as have others, and I’m not going to rehash it again at this time.  We wear heavy, cumbersome body armor that makes it difficult to maneuver, reducing our effectiveness as soldiers.  The LCE served its purpose but needs to be taken into the 21st century.  Chest Rigs are also great for many applications, but can become unsuitable when loaded to capacity, making it difficult to lay in the prone or crawl on the ground while under fire.

Before moving on, let me list the components used to put this gear together.  It is built on a ENDOM’s CM Belt and Battle Suspenders.

The chest piece is built on a Tactical Tailor modular bib panel.  Attached to the bib is a ATS triple magazine shingle and one single mag shingle for a total of four magazines.  Mounted on the magazine shingles is a Kifaru admin pouch for holding various odds and ends such as maps, compass, GPS, ect.

Attached to the back of the suspenders via Malice clips and some lengths of nylon is hydration pouch.

On the belt, to the six o’ clock position, under the hydration pouch, is a horizontal Tactical Tailor E&E pouch containing basic survival items. On the left hand side of the belts is a Eagle double magazine pouch for .45 mags, located near the belt buckle for easy access.  Behind that is a Bench made fixed-blade knife, and Maxpedition dump pouch.

On the right hand side of the belt is a double grenade pouch, a modified Safariland drop holster, and ATS medical pouch.

Doing some field testing, I would go for kit runs wearing everything seen here and running for several miles across varied terrain to make sure everything felt right and functioned properly.  While running I found that the front panel bounced up and down quite a bit, slamming down on my stomach and becoming fairly painful after a couple miles.  For this reason I added the horizontal strap you see under my arm pit that connects the front bib to the hydration pouch.  This strap has the effect of tightening down the entire rig for a closer fit, making it ride much more comfortably.

What I was looking for in the design was something I couldn’t find commercially.  I wanted a modernized LCE, something that was light weight and facilitated maneuver and unconventional warfare to include infiltrations.  When it comes to the latter, I’ve found that when chest rigs are filled to capacity that it becomes difficult or impossible to high crawl or low crawl, the same goes for plate carriers.

Later, I did feel the need to add more than what you would expect from a simple LCE.  There was some modern kit that is so useful that I felt I had to include it.  Sure, expended magazines can simply be dumped down the front of your shirt, but a dump pouch sure helps and also gives you the ability to carry extra mags in it during an emergency or use it to carry intel taken off dead enemy.  Likewise, I felt that a modern medical pouch is something you don’t want to compromise with.  For a soldier operating behind enemy lines, a bare minimum of survival and Escape and Evasion gear is also needed, hence the horizontal E&E pouch.  With all this space taken up from the get go, I found that I needed to attach a hydration pouch and a panel for extra magazines above the belt line.

All and all I am very happy with how this project turned out.  I only wish that I had had the opportunity to use it in combat.  If need be the straps can be loosened and soft armor or concealable body armor can be worn underneath making this rig even more versatile.  Readers may be interested to know that this is the exact same rig described and used by Deckard, the protagonist in “Reflexive Fire”.  I’ve also been working with the cover artist to ensure that the uniform and kit on the cover of the book matches what you see here exactly to maintain continuity as well as show readers something they’ve never seen before.

I’m sure that a professional could refine this design and sew something much better, whereas I had to cobble it together from spare parts.  I think experienced soldiers are finding that less really is more and adopting a “combat ultra-light” mentality is the way to go.  Sadly, the Brass doesn’t see things the same way.  Until then, lets hope some people run with this idea and see where it goes! 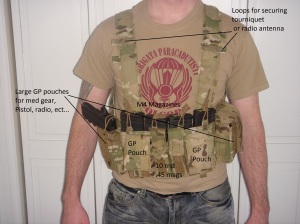 Click on the picture above for a detailed breakdown on the Mayflower unconventional chest rig.  The above is a lightweight, low-cost, low-profile combat rig.  I bought this just as I was leaving the Army and didn’t have the chance to use it in combat, but found it to work like a charm out on the range while field testing the SCAR rifle.

Here is all of the equipment I had loaded in this chest rig when I took these pictures.  I’m only showing this as an example of how much you can carry comfortably.  This is not an example of what I would necessarily carry in combat.  Here we have 4x M4 Magazines, 2x CMC .45 magazines, a monocle, lock pick set, gloves, headlamp, Garmin Foretrex, and a pocket calculator.  You could cram more in there if you were so inclined but this is a good sample.

What separates the Mayflower UW rig from others is it’s emphasis on what for lack of a better term, could be called tactical ultra-light.  While most combat gear these days is advertised as being “bomb proof” the UW rig is made from lightweight materials, taking a minimalist approach.  After eight years split between the Ranger Regiment and Special Forces, I definitely agree with this approach.  There is no need to wear body armor into every single scenario, nor is it necessary to carry eighty to ninety pounds of kit on your person at all times.   A lot of this happens because commanders are obsessed with safety and fail to consider the effect that carrying all that kit has on men, weapons, and equipment.  I’m not making an argument against body armor, I’m just saying that because it has saved lives in some instances doesn’t mean it should apply in all instances.  Think dismounted patrols through the deserts of Iraq or mountains of Afghanistan.

Is all this really needed….

In maneuver warfare, not to mention unconventional warfare, troops need to be able to, that’s right, maneuver.  The inclination towards wearing every piece of armor and carrying every bit of kit, just in case, is extremely powerful.  I had a Sergeant Major who said something along the lines of, “If you give a Ranger a bigger rucksack, he’s going to go ahead and fill it to the top.”  It was meant as a warning.  Our rucks are to damn big, and just because you have some excess webbing on your body armor doesn’t mean you need to attach something there.  In the above pic of me moving that rebar out of the way, I could barely damned move.  Yeah, the gym helps, but only so much when you are carrying that much in the Summer heat.

If I was to add something, it would be a place for a camelbak.  No matter how lightweight you want to go you still need water.  Overall I have been very pleased with the UW rig.  The more experienced you become as a soldier and a shooter the more you ditch all the excess equipment and move back to the basics.

I was inspired enough by this design that I got to thinking about what an updated LCE would look like.  What I came up with is something I will post here in the future.  Until then, if you are interested in going ultra-light you can’t go wrong with the UW rig.  If you want to read up on the tactics that justify the above mindset please read “The Last Hundred Yards,” “Brave New War,” or do some research on the Rhodesian Light Infantry.