Today’s recommended reading material.  Delta Force in Fallujah, 5APR04.  The Activity is a comic book about Special Operations, one that mother Army wishes I would stop promoting…

In a dark corner of American special operations there exists, alongside the Army’s Delta Force and the Navy’s Osama bin Laden-killing SEAL Team Six, a small unit of Army spies known as the Intelligence Support Activity.

Created more than 30 years ago, the ISA has had its hand in almost every high-profile American special operation around the world in recent history, and countless others, according to published reports and special operations veterans with firsthand knowledge of the group.

And though relatively little is known about the secret unit — the military still refuses to acknowledge its existence — a new, colorful picture of the group has emerged through, of all things, a comic book.

In the panels of the comic “The Activity,” writer Nathan Edmondson and artist Mitch Gerads create a cell-shaded version of the ISA’s world in which the plot is fictional, but much of the rest rings true, even to those few familiar with the comic’s real-life counterpart.

One former member of the special operations community, who requested anonymity to speak about the ISA, told ABC News that while the comic clearly condenses intelligence-gathering timelines and significantly expands the ISA’s duties for the sake of dramatic story telling, he was surprised at its overall accuracy.

Read the rest on ABC News! 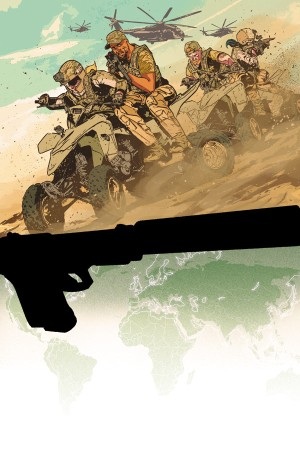 As an occasional military consultant for this comic, I have a few quotes in the article! -Jack

When the deadly raid against Osama Bin Laden’s fortress was announced to the world, the truth behind the secretive group responsible, Seal Team Six, was kept secret. But inside the Special Forces community there’s a group even more secret than Seal Team Six; it’s called the Intelligence Support Activity, the ISA. And for the first time, this clandestine group is getting its chance in the sun in a new comic book series from Image titled The Activity.
Created by writer Nathan Edmondson and artist Mitch Gerads, The Activity is a comic series in the vein of Tom Clancy if he was a hardcore Call of Duty gamer, mixing heavily researched military specifics with action-oriented storytelling ideal for the comics medium. A collection of the first six issues came out in June.
The Activity features a real-life, and truly secret Special Operations group in high-action, globe-trotting missions, most fiction, but some based in reality,” explains Edmondson, who also wrote the spy/noir series Who Is Jake Ellis?.”In real life the Intelligence Support Activity has a goal of being the “eyes and ears” of the Special Operations community—serving, for example, groups like Delta Force (who are more recently called “Combat Application Group.”). “
“There is much speculation, however, that within the ISA is a contingent that focuses on more ‘hot’ engagements: snatch and grab jobs, assassinations, battlefield preparation,” explains Edmonson. “The Activity’s Team Omaha is a fictionalized representation of that idea. But whether within the ISA or not, what our team does in The Activity are things that groups in our Special Operations do, absolutely, in real life.”
Edmondson and Gerard open up the world of the ISA and The Activity in the first story-arc through the introduction of a new recruit into Team Omaha, nicknamed Fiddler. The team quickly find themselves on the road, with missions crisscrossing the globe. The book features stories about current conflict zones without pulling any punches or making up fictionalized nations.
Read the rest at Publisher’s Weekly!