PenCott, SOD, and Accuracy International at the SHOT show

Many of you may remember that I had a very favorable impression of  SOD’s uniform in Pencott’s “badlands” pattern that I reviewed last year, so it was great to meet the uniform’s creator at SHOT.  Max Valente told me that he is very excited about working with Pencott and that in Italy they are having some of the same issues that we are having with our camo patterns, and he is happy to offer his products to the Italian military since a lot of their issued items are not always up to standard.  Interestingly, he also said that what is publicly available on SOD’s websiteis perhaps 10% of the products that he has developed and sold.  The rest have gone to Italian Special Operations units, such as Folgore, and can’t be disclosed.  I could tell from talking to Max that he was really excited about the projects he had brewing behind the scenes and wanted to tell me more but simply couldn’t.  I’m hoping that some of these details will be revealed as the war in Afghanistan winds down but for now we can enjoy SOD’s work with Pencott, such as the “sandstorm” patterned uniform above. 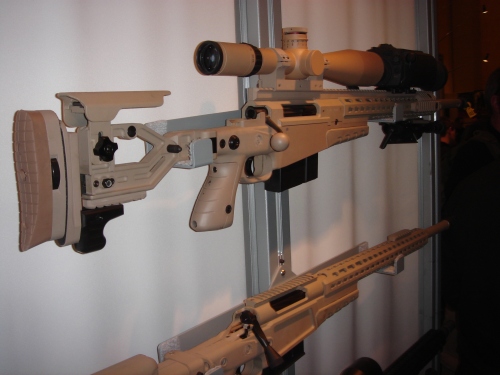 Accuracy International was at SHOT this year showing off their new sniper rifles, including an updated modular chassis system with increased mounting options for slings and rail systems, newer models forgoing the classic thumb-through-the-stock grip that served us well with the .300 WinMag when I was a sniper.  The above rifle is AI’s new .338 long gun that accepts both 5 and 10-round magazines, without the need to lift the rifle off the ground while in the prone position due to a cut out on the side of the magazine well.
Read more: http://kitup.military.com/#ixzz1kQ6tsACl

Kit Up! gets the low down on the finalists for the new Army camo scheme

Now that the US Army has announced that they have narrowed down their pool of camouflage schemes for potential replacement of the ACU pattern, we know that Hyperstealth’s entry is among the finalists.  I dropped by ADS (who is partnered with Hyperstealth) today at the SHOT show to talk to Guy Cramer about his entry.  He showed me what he called Version B, which is 99% the same as Version A, which is one of the four patterns currently being looked at by the Army.  In other words, most of us probably wouldn’t be able to tell the difference.

Hyperstealth Biotechnology Corp. recently revealed that they have developed the first true chameleon type camo uniform, which changes colors to blend in with whatever environment the soldier is in.  Needless to say this is a major development in the industry and represents a holy grail in the field and science of military camouflage.

Myself on the right wearing a Hyperstealth uniform in Iraq.  This is just an example of their product being used in theater and is NOT SMARTCAMO.  Currently, no pictures of SMARTCAMO have been publicly released.

Guy Cramer, the mad scientist behind Hyperstealth, has said that the technology itself is a “composite” (presumably of different systems and techniques) but does not involve nanotechnology, ruling out, I would think, some sort of Phased Array Optics of the variety that actually bend light, in line with the kind of technology seen in the “Predator” movies.  In this case were are not talking about the user becoming invisible, but changing color to match the immediate surroundings.

According to military.com, Cramer has also confirmed that the technology uses power and logic, meaning that it runs on a battery and utilizes some sort of on board computer.  What form this takes is unknown.  A small plastic power pack velcroed the uniform, or slid inside a pocket?  Embedded into the uniform fabric itself?

I’m on the left wearing the “Desert Dune” pattern uniform offered by Hyperstealth.

Another feature of SMARTCAMO is that it also adapts to the IR spectrum, allowing the soldier to blend in better when viewed through night vision devices.  This is speculation on my part, but I wonder if this allows it to also defeat thermal systems.  I’m not an expert, but I believe that thermals work by detecting the infrared light produced by a heat source.  If this uniform can manipulate the IR levels put off by the uniform to blend in with the background temperature, can is also mask the user from thermal imaging?

Cramer even commented that the uniform feels and wears like any other military uniform and can even be used for maritime operations.  The only drawback at the moment is that the SMARTCAMO uniform costs about 1,000 USD to produce, putting it out side the budgets of all but the most well funded Special Operations units.

Reportedly, DoD and USSOCOM are very interested in this technology and have asked Hyperstealth to remove the video demonstration of their SMARTCAMO uniform from their website.  Keep an eye on SMARTCAMO, if any mention of the technology dissapears from Hyperstealth’s website and they refuse to comment on it further, than you can bet that it got swept up by some Tier One Special Operations outfit and was classified as Operational Security (OPSEC). 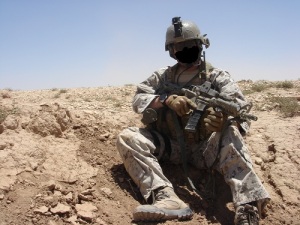 Above is a picture of myself in Iraq last year wearing a uniform manufactured by Hyperstealth Biotechnology Corp.  Before deploying I did some research looking for a uniform with an effective desert pattern.  ACU’s just don’t cut it, as the Army has had to reluctantly admit only after Congressional intervention.  The Marines have a pretty decent desert uniform but wearing that might constitute perpetrating a fraud in the eyes of a Marine (I was Army) so I ordered a few uniforms from Hyperstealth.

The uniform is from their SPEC4CE series and is called Desert Dune.  The cut is similar to the ACU and other modern US military uniforms with pockets on the sleeves and ankles.  One noticeable difference is the lack of velcro, most of it being replaced with old school buttons.  The pattern itself is a four color digital type which worked very well out in the hinterlands.

The lightweight fabric used was MUCH appreciated come summer time in Iraq.  This uniform was much more comfortable then ACU’s, DCU’s, and a Multicam uniform I had from Propper.  The trade off is that the lightweight fabric is more prone to rips and tears.  In a 130 degree heat I was happy to accept that and engage in a little Suzy homemaker stitching post-mission when needed.

I would definitely recommend this uniform to soldiers currently deploying to the Middle East.