Should Our Troops Be Armed While in Garrison? Not Anytime Soon…

Recently this issue has come up due to the recent shooting of four Marines and one sailor at a recruitment station in Chattanooga, Tennessee.  While most Americans are oblivious to this fact, one of the best places a terrorist could go to stir up shit is on a military post.  It seems completely counter-intuitive, like a bank robber trying to knock off a NRA convention, but the reality is that our troops are almost completely disarmed on military bases in the United States.  Yes, Military Police carry their side arms while on duty (usually) and soldiers in charge of guarding an ammo point will probably have a rifle or pistol with one magazine of ammunition.  Otherwise, unless a soldier is out on a shooting range conducting marksmanship training, he is not carrying a loaded firearm.

Another great place to target our soldiers isn’t just on American military bases, but also on overseas Forward Operating Bases in active combat zones!  In Afghanistan and Iraq (oh hell you are going to love this) it is mandatory for soldiers to carry a weapon…but also mandatory that their weapon be unloaded!  Not even a magazine in the mag well!  They have to have their paperweight rifle or pistol with a spare magazine in a pocket or inside one of those cutesey magazine carriers you get at the PX and strap to your buttstock.

Now any good Special Forces soldier just cranks a round into the chamber of his Glock and rolls with it under his shirt, flashes it to the dweeb at the chow hall who has to check to make sure you have an unloaded weapon, and then goes about his business.  Nobody briefed Charlie on the regs last time I checked.  But Big Green doesn’t have that option.  Johnny Jihad can waltz into a chow hall and mow down dozens of soldiers while our poorly trained troops look like a bunch of naked people while wearing roller skates locked in a room with the lights turned off as they try to jam magazines into their weapons.

I think this policy of being forced to carry an unloaded weapon is as stupid as you do, but believe or not the reflective belt Sergeant Majors of the world have their reasons.  Our young men and women have more negligent discharges than a Fayetteville military dependent has kids.  Hate to break it to all the Dicks and Sallys out there but the average soldier isn’t exactly some highly trained combat killing machine.  Maybe they got a few weeks of Basic Rifle Marksmanship in basic training and after that it is a crap shoot.

This is what you have to think about when we have the discussion as to whether or not service people should be armed in garrison, including recruitment centers.  I feel very comfortable is saying that we would lose more soldiers to negligent discharges than we would to lone wolf Jihadists like the Ft. Hood shooter and this ass clown in Chattanooga.  The stories of NDs go on and on.  Joes accidentally blasting through a half belt of SAW ammo on the way to the chow hall in Bagram, another Joe having a ND with a LAW rocket launcher on a base, I even saw a young Ranger ND a M240B machine gun on the back of a C17 airplane…thankfully only with blanks in that case.

So what is the solution?  It isn’t to treat the jihadist threat or workplace violence as a episodic problem which needs a “fix” but to look at a holistic solution to improving our military.  That solution is to actually train our soldiers, all of our soldiers, into the effective combat killing machines that Americans wish they were.  That means classes in marksmanship in garrison, that means getting them out to the range once a week to shoot live rounds, that means carrying their weapon with them wherever they go.  At the end of the day, it means cultivating a more mature military force.  I saw this with my own eyes when I got to hang out with Swiss soldiers. 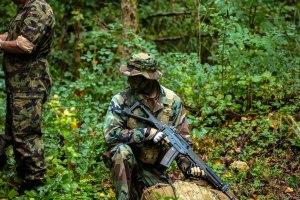 Hanging out with the Swiss

In Switzerland it is perfectly normal for a reservist to have a fully automatic SIG 550 in the trunk of their car.  No one bats an eye at a Swiss soldier on the train with his rifle.  The numbers of NDs or other incidents they have with soldiers and their weapons in Switzerland are extremely low.  When participating in a Swiss training exercise, I carried a 550 as well.  Going to a restaurant to eat on the way to training, the manager was perfectly happy to lock our rifles and rucksacks in the closet while we ate.  It’s just a different culture, and one that I greatly admire.

Maybe one day our soldiers will get the training they deserve, America will abandon any silly notion of a gunless culture, and our country will also get the highly trained professional military that it deserves.

A man can dream anyway.

3 responses to “Should Our Troops Be Armed While in Garrison? Not Anytime Soon…”