So far we are weapons hot here in Las Vegas for the SHOT show.  I hosted Inside the Team Room, filmed in The Foundation Room at the top of the Mandalay Hotel yesterday.  The guests were former 3rd Ranger Battalion soldiers Isaiah Burkhart, Clyde Carmody, and Nick Irving.  I think we got some great stuff on tape, the bulk of the show will consist of funny and ridiculous stories from Ranger Battalion with an equal amount of time spent on combat deployments.  Inside the Team Room will now go in to Post-Production and I will keep you up to date for when the first episode goes live.

Finally getting some sleep, Burkhart, Nick, and myself headed out to the Media Range Day with Brandon Webb this morning.  We got to fire some guns but it was way colder than anyone expected.  Not at all a fun day to shoot!  We did check out the new Gen. 4 10mm Glocks which were pretty sweet.  I also finally got some trigger time on the HK 417.  In my novel, Target Deck, I have the team sniper carry the 417 as his primary weapon.  I didn’t have any experience behind this rifle myself but when some experts in the field that I know tell me that this is their favorite semi-automatic sniper rifle I am willing to take their word for it. 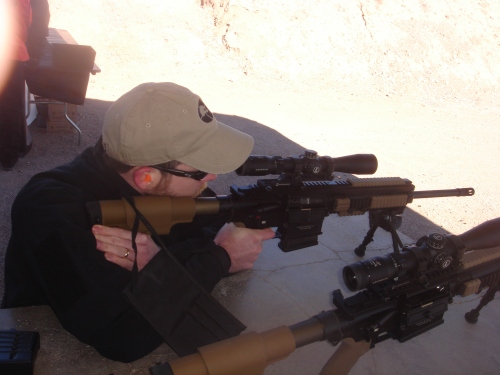 Shooting the HK 417, as you can see it was a little windy

The rifle itself fired much like the SR-25 but with the gas-piston upper receiver the recoil goes straight to the rear of the rifle as opposed to pushing the rifle to the rear and upwards with a traditional gas gun.  Long distance marksmanship (and marksmanship in general) is a perishable skill and unfortunately I don’t get much trigger time these days as I live in New York City and don’t get away from my college studies as much as I might want too.  Yeah, I had no trouble knocking out the center of a steel target, but that is with a 7.62 rifle, with a ten power scope, from about 75 meters away.  Not exactly an impressive sniper shot.  However, I came away from my experience with the 417 thinking one thing: I WANT ONE.