An American Freedom Fighter in the Libyan Civil War: Part 2 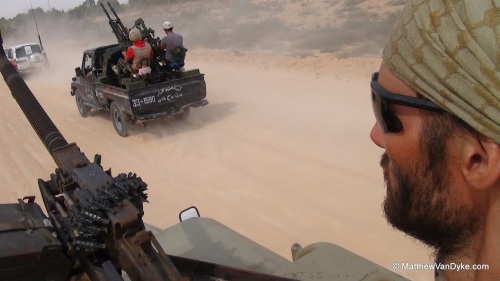 In part 1 of this series we covered the exploits of Matthew VanDyke, an American Georgetown grad who traveled to Libya to join his friends and participate in the armed rebellion against Gaddafi’s 40+ year dictatorship.  In part 2, Matt told me about the circumstances of his capture by the Libyan military.

“On March 12 I went with three other rebels on a reconnaissance mission to Brega. Ra’s Lanuf had just fallen to Gaddafi’s forces a couple of days before, and Brega would be attacked next.  We did not think that Gaddafi would move so quickly after taking Ra’s Lanuf and thought we had a few days before Brega would be attacked. The plan was to recon the city, identify defensive positions, and then return to Benghazi to gather more men and weapons before going back to Brega to help defend it.

On March 13, during the reconnaissance mission, we were ambushed by Gaddafi’s forces. I was struck in the head during the ambush and woke up in a prison cell to the sound of a man being tortured in a room above me. I have no memory of the ambush or what happened to the men I was with. One minute we were talking to some locals in the street who served us coffee and I took their picture, and the next thing I remember was regaining consciousness for a few seconds with my hands and legs tightly bound and me being carried, and then I woke up in the prison cell.

One response to “An American Freedom Fighter in the Libyan Civil War: Part 2”