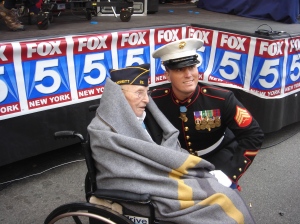 This Veteran’s Day I had the honor of being able to act as a liaison for Mr. Oreskoat the Veteran’s Day parade in New York City.  At age 94, Mr. Oresko was ordered by his doctor not to attend the parade.   That didn’t seem to deter him much.  After all, Mr. Oresko almost single handedly cleaned out several bunkers full of Nazis during the Battle of the Bulge.  The cold weather wasn’t about to keep him away.  The last ten or so blocks of the parade, Mr. Oresko felt up to getting out of the vehicle for a bit and was pushed down 5th Avenue by his friends and caretakers.  People cheered and clapped as the oldest living Metal of Honor recipient passed them, I think everyone was really in awe of this man.

Read more: at Reflexive Fire and news about the Special Operations community.