The Selous Scouts, a uniquely Rhodesian solution to counter-insurgency 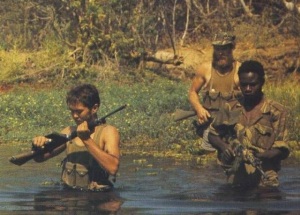 Lasting from the mid-1960′s to 1980, the bush war in Rhodesia saw this tiny land locked nation surrounded by communist backed insurgents operating from the adjacent nations of Mozambique, Zambia, and Botswana. Robert Mugabe’s ZANU was supported by Red China while Joshua Nkomo’s ZAPU was a primarily a Soviet sponsored insurgency. With guerrilla fighters pouring across the borders, Rhodesia’s military fought tooth and nail, especially as the war heated up around 1976. Fighting the war on a shoe string to a point difficult to compare to today’s War on Terror, the Rhodesian forces conducted lightening fast raids and parachute jumps behind enemy lines.

3 responses to “The Selous Scouts, a uniquely Rhodesian solution to counter-insurgency”