Reflexive Fire: Get it now on your Kindle! 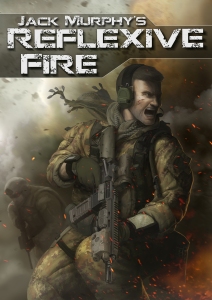 Reflexive Fire got published on Amazon even faster than I thought it would.  The book has it’s first five-star review on the Amazon page from a pre-release copy I sent out.  It was cool to see that Hank picked up on a number of things I attempted to accomplish with this book.  The literary world of Thrillers, especially those about military or ex-military types, is highly politicized, no getting around it.  When I wrote Reflexive Fire, I really spent some time thinking about who the villains should be.  What is the biggest threat facing America?  Islamic terrorism is real, I’ve seen it up close, but less Americans die from terrorism each year than from being struck by lighting.  I decided not to write yet another novel about stereotypical Arabs running around with towels on their heads and shouting “Allah Akbar!”

The villains in Reflexive Fire are those who occupy hidden centers of power such as large international lending institutions like the IMF and the World Bank.  The individuals who meet in secret to make foreign policy decisions for America at the Bilderburg Group and the Council on Foreign Relations.  I made a real effort to cut through the childish notion of left and right wing politics to home in on who is really destroying America and American freedom.

As Hank wrote in his review:

“I’ve learned to avoid political thrillers, and ordinarily wince, groan, roll my eyes and grit my teeth when the author of any novel starts to portray their naive concept of how back room politics play out. This was another pleasant surprise for me. The author bypasses the two-party good-cop-bad-cop charade to tickle the truth hidden behind it. A few years ago, to even mention the workings of the shadow government was to invite ridicule and worse. Maybe this has changed as certain evidence becomes more difficult to hide. Still, I admire the author’s courage to reject the blue pill publicly. “

I expect that this stance will cost me some readers but I feel good about the direction this novel took.  For the type of reader who likes to google the things he reads in a book to see if they are real, I think they will find the information in Reflexive Fire to be authentic and shocking in many ways.  I hope that you will read one of the early scenes in the book about Bohemian Grove and think that I wrote something over the top and ridicules.  Look into if for yourself, I’m not that creative.  This stuff is real!

See for yourself in this in-depth article about Bohemian Grove

6 responses to “Reflexive Fire: Get it now on your Kindle!”