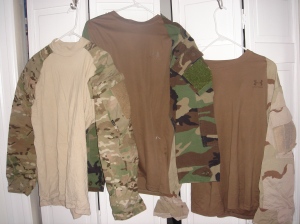 Today I will review customized uniform tops I had made and give some tips and ideas on how you can do the same.  These types of fatigue shirts first made their appearance with Crye Precision.  The idea is that they wear better and more comfortably in hot weather, especially when wearing heavy body armor.  Typically called “combat shirts”, Crye’s first attempt was good but expensive, and most regular army troops could not where Multicam patterned uniforms.  To rectify this problem, the Army jumped all over the idea and made it’s own version.  Most soldiers thought it was a good concept…aside from the huge logo on the chest that said:  ARMY STRONG.   There was one other reason why the Army combat shirt drew fire, it wasn’t flattering to some of our troops:

*Sigh*  Damn Marines embarrassing us again.  Let’s get back on topic.

This top is the first generation combat shirt is sold by Tru-Spec, a well known uniform manufacturer.  Following in Crye Precision’s footsteps, Tru-Spec made their own combat shirt and sold it at a reduced price.  In some regards I think it shows.  For one thing the sleeves are too short.  Most soldiers tend to roll them up anyway, so this may or may not matter to you.  Secondly, I didn’t like the material that the soft portion of the shirt is made of.  It feels to much like a cotton t-shirt to me, not the kind of thing you want to wear in the desert.

Notice that the fabric spans across the shoulders on the back of the shirt.  As I found out later when attempting to have my own shirt made, there is a very good reason for this.  Another point is the turtle neck collar.  It’s uncomfortable, but it also prevents the straps on your kit from chaffing your neck, another important point that was initially lost on me when I had my own shirt made.

My first attempt.  Most of the guys on my team went over to the Turkish guy who worked in a nearby sew shop in Iraq and requested that he make these tops for us.  Eventually, he got to the point that he knew exactly what we wanted as soon as we came walking through his door.  He actually did a very good job.  He moved the pockets up onto the sleeves, attached the velcro for call sign patches, and sewed an Under Armor shirt into the DCU shirt sleeves.  It’s very comfortable, but with one big flaw.

Tru-Spec knew one thing I didn’t.  Without that span of fabric across the back, the shirt stretches, as the Under Armor t-shirt is made to do, creating a sagging effect.  The shirt can now bunch up or pull out from under the straps of whatever chest rig or body armor you are wearing.  Generally though, if you pulled the shirt under the straps of your body armor, the weight alone would keep everything in place.  These shirts were a life saver when working in Iraq during the summer. 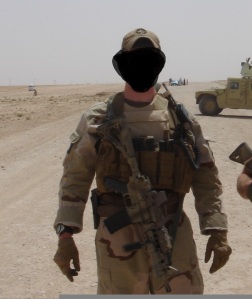 Here you can see why that collar is so important

Sun burned and with the strap of my body armor digging into my neck.  Not cool. 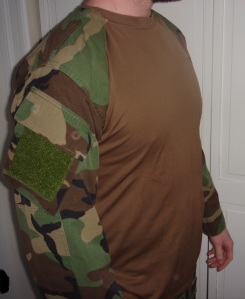 I had this one done by a sew shop outside Ft. Campbell when I got back from deployment.  She kept the t-shirt without cutting it, literally just sewing it into the shirt sleeves of the BDU top.  Not the preferred method, but it does work pretty well. 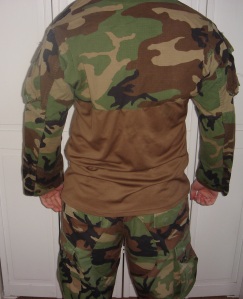 This time I was smart enough to have that strip across the back left in place, however, I should have had the collar left as well.  I found that while doing kit runs that my gear would ride up and chaff my neck without a collar there.  Other than that, it is very functional.  At the time, taking a t-shirt and fatigue top and paying a sew shop 20 bucks to make one of these for you was ideal as opposed to paying hundreds of dollars to one of the many companies making combat shirts.  However, I did a quick search and found that the Tru-Spec shirts are going for a very reasonable 60 dollars so that might be the way to go.