As you can see the main page here at Reflexive Fire has been hit with a shotgun blast from my new short entitled PROMIS.  It is the first in a series that will follow Sean Deckard, the father of the protagonist in my novel, Reflexive Fire.  The first issue revolves around Sean’s time running recon with Studies and Observations Group (SOG) and taking part in cross border operations during the Vietnam War.  You will also be introduced to Leon Petraska, a CIA funded scientist with some big ideas that the brass isn’t quite ready for.  Remember, you can sample the first five pages right here on the website before buying PROMIS for 99 cents at Amazon. 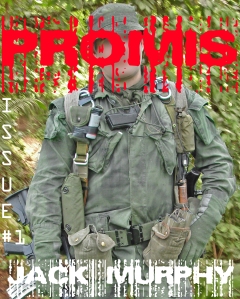 Sergeant Sean Deckard has been running recon with America’s ultra secret Studies and Observations Group for over a year, taking part in cross border operations into Laos, Cambodia, and North Vietnam. Coming off a mission that nearly decimates his entire team, Sean is given yet another suicidal task. It is a mission that could end the Vietnam War, a mission that powerful forces will do anything to prevent from happening.

Issue One in an exciting new military fiction series.

Also, don’t forget to check out the preview of Issue 2!