In conducting research for the first short in a series I am writing (more about that later) I came across this website: ModernForces.com

I have to confess that I never really “got” reenactments before.  I had heard stories about Civil War reenactors starving themselves and spooning with each other in their confederate war camps in the name of authenticity.  I had a SERE instructor who was a great guy, but his descriptions of the Rev War reenactments he participated in, namely sleeping in a lean to’s  in January, sounded pretty nutty.

Studies and Observations Group, or SOG, was highly classified during the Vietnam War.  In fact, not much information about them was available at all until the 1990’s.  Reading between the lines, I suspect that there is still a fair amount of activity that SOG was involved in that has not been made publicly available.  There are a couple of books out and some grainy photos released, but the Modern Forces website really brings history to life. 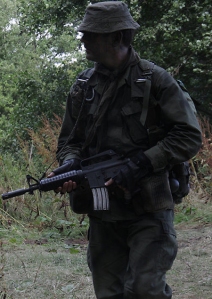 The attention to detail is pretty amazing and I’m sure the people involved spent a lot of time putting together the uniforms and equipment to such a high degree of historical accuracy.  The full color images and close in shots of the equipment used really gives an idea of how SOG operated, a perspective you don’t really get from the older 1960’s era photography.  When you have the chance I highly recommend taking a look at the pictorials in the SOG section of the website.  A few Vietnam veterans who served in SOG have also contacted the website and provided exclusive photographs and interviews, a must read for anyone researching Special Forces units and missions during the Vietnam War.