I figured I would take a little break from all this go-to-war stuff.  Maybe some people want to see something else other than esoteric and obscure methods of strangulation, who knows?

This is a picture of me at the ruins of Lubantuun where the world famous Mitchell-Hedges crystal skull was found in Belize.  Due to poor record keeping at the time, the care takers were unable to tell me exactly where the crystal skull was found.  It’s a fascinating story in of itself.  Anna Mitchell-Hedges found the skull buried in these ruins on her sixteenth birthday in 1924.  Nobody knows who made the skull or how, and because you cannot carbon date crystal, no one knows how old it is either.   Apparently, Mitchell-Hedges was of the opinion that it came from Atlantis.

Another picture from the jungles of Belize.

Doing a little bit of Spelunking in a jungle cave in central Belize.  As you can see, it was damned hot down there. 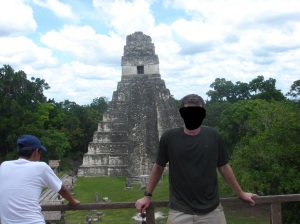 Tikal, Guatemala.  Absolutely amazing place.  You feel like you are inside a Tomb Raider game or something, only much cooler.  Make sure you take a look at Lake Flores on the way there, another beautiful place. 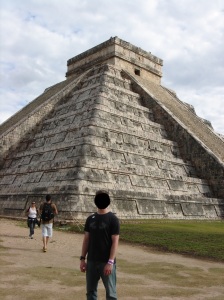 Chechen Itsa, Mexico.  Mayan pyramids.  Another very cool spot, even while hung over as it turns out.  Great scuba diving in this area of the Yucatan as well.

2 responses to “Random adventures in Belize, Mexico, and Guatemala.”