Strange and Interesting weapons in Iraq

This was a nice CZ75 pistol a contractor doing some construction for us had.  I liked it enough that I was going to try and buy or trade something for it until I realized that he wanted to charge me enough that I could just buy myself a brand new one back in the US.

This is a AK rifle grenade that I was looking at in a improvised Iraqi arms room.  It is fired from the barrel of the AK-47 with a blank round that is provided with the grenade.  The pin in the nose is a safety. 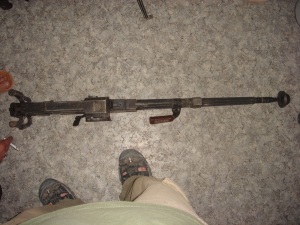 This is a Gorjunov WW2 era Soviet machine gun.  It fired the same 7.62x54mm Rimmed ammo as the PKM.  I took this picture before I attempted to disassemble the thing.  Ultimately an Iraqi NCO (pictured below) showed me how it was done.  This particular rifle has been retrofitted with a bizarre flash suppressor (?) for some reason.

Check out this Chimera of a rifle.  It was home made, constructed by the soldier holding it in his home with a mish-mash of weapons components.  It features a AK receiver fitted with a home made M16 style charging handle, a PKM barrel, a improvised wooden stock, a Browning Hi-Power pistol grip, and finally a crappy BB gun scope.  This thing actually fired, I saw it with my own eyes, from a safe distance of course. 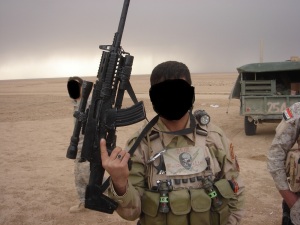 Here is another shot of the rifle with it’s owner.  You can tell he is a gear nut as well as being a gun nut.  We had a lot in common.  Note the flash bangs we gave him, the flare gun on his left side, and home made unit insignia on his chest.

9 responses to “Strange and Interesting weapons in Iraq”